Guilmon brot!
When corona started and we all had to stay at home I decided to watch all the Digimon seasons - mostly because I didn't watch the 5th, 6th and the 7th season and I wanted to see what I was missing (I highly recommend the 7th season - appmon - I know ... at first I hated the name too). After watching all the new seasons I started rewatching Digimon Tamers. In 44th episode their parents made a meal for Takato, Rika and Henry and their Digimon partners to give them their support for fighting with D-reaper. Since Takato's parents own a bakery shop they created a Guilmon bread for Guilmon. And since I feel so creative lately I decided to try to make my own Guilmon bread.

This was my first time baking bread and it was super easy. All you need is 250g of flour, 20g of butter, 7g of salt/suggar, 1,5 dcl of milk, 10g of dry yeast and one egg. I just wanted to make one guilmon bread so I tried to use as few grams as I could. With this, you can make 2 guilmon breads and 3 normal buns.

First thing first, I melted the butter and mixed it together with sugar. In another cup I had 1,5dcl of warm milk which I mixed with 10g of dry yeast. In another bowl (I used so many dishes for this, happy cleaning) I only had 125g of flour and added milk with yeast and butter with suggar. Before mixing it add 7g of salt and one egg (I almost forget about salt and egg, oops). Since I don't have the mixing machine I was mixing it with a spoon for a few minutes. After a few minutes I added the rest (125g) of flour in the mix and tried to mix it with a spoon but the dough became really hard to mix so I put some flour on the table and kneaded the dough. I had to add some more flour since the dough was really sticky.

After creating the dough you leave it for one hour to rise. After one hour it's time to create the Guilmon's head shape. I created a stencil out of a bake paper (for his head and for the symbols he has on his face). I cut out the Guilmon's head and try to shape it to look like the Guilmon bread from the series. I created 2 Guilmon bread and on one I spread the egg on it and on the other one I didn't (the one with the egg was more beautiful so I used it for pictures). I used a toothpick to create a holes for his nose and dried cranberries for his eyes. The symbols were created with flour - I put the stencil I created on the head and "sprinkle" the flour on it. I waited for another 30 minutes so that the dough would rise as much as it could. After 30 minutes I put the bread in the oven for 20 minutes on 200°C. And voila, the bread is ready! Super easy and fun! It takes a bit more time since you have to wait for the dough to rise but the results are super cute. Pictures below. 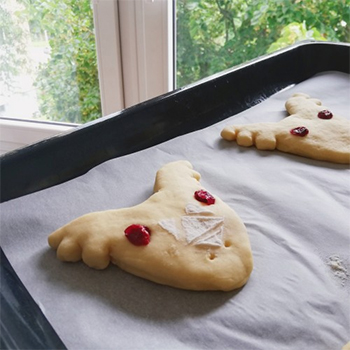 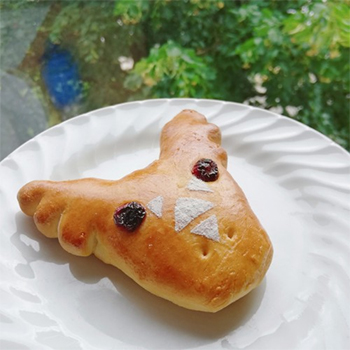 Okay, that's it for today! I will continue watching Digimon Tamers and maybe I'll get another idea of what to make! ;) See you soon!