Otsukai - one of my fav app right now!

I don't really know how I found this app/website but I have to tell you, it's one of my favourite right now. Otsukai is actually a service that helps you to get a hold of a japanese only items that can't be found elsewhere.

I use this service for a lot of things. For example when I was in Japan I bought this really cute tote bag in Kyoto (in a really small shop next to the monkey park). After a year of using it the bag tore and I couldn't  find another one. I was searching on the internet a lot but all the websites were only shipping it to Japan or Asia. So I decided to use Otsukai and see what will happen. I got a lot of offers with different prices and I chose the cheapest one and voila, 2 weeks later I had the bag I was looking for. No complications. I don't know the cost of the shipping but I think it's pretty cheap because everything I ordered wasn't really expensive - It's not like you pay 10€ for the item and another 10€ for the shipping. It's really low budget.

On my last order I thought they charged me twice for the same item and they have such a nice support group and we managed to solve the problem really quick (it was my bank's fault in the end).

The only thing I kinda dislike is that they only accept the request for Japanese language only items. I tried to order some Digimon comics that are actually part of Japanese firm - Bandai and were also released in Japan (or so I think) but because of Chinese author/language they removed my request. It's actually not a big deal or anything but I was sure someone from Japan could find these comics sooner than I would.

I actually wanted to talk about my latest order because it's connected to Digimon. I live in a small country in the central Europe and while growing up there were no Digimon related merchandise here - just Digimon cards and Digimon Album. Everything else I own was found in our neighbour countries by pure luck. When I was a child there was no internet to buy it from. Right now it's a lot easier to find things you like online and just buy it.

I love the art for this CD, the four of them sitting on a hill with nice blue cloudy sky. They all look so happy. And the details are so cute - right next to the credits there is this line ".. 太一の バーカ。" that translates to "... Stupid Taichi." and it just reminds me on the second movie Our war game. And also on the left side of the CD there is a text that says "If it's with you, I can fly to the other side of that sky. That sky-blue wind, I will blow one day, to bring courage to everyone. Taichi Yagami & Sora Takenouchi. Taichi and Sora."

And it just makes your eyes all teary, right? 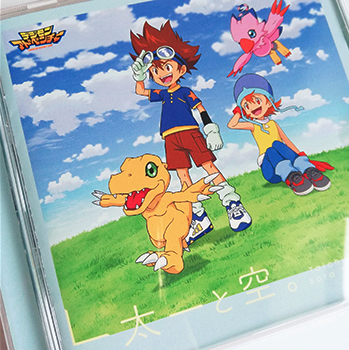 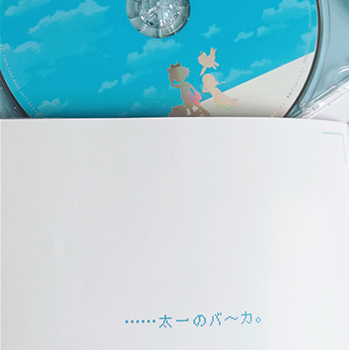 Check the pictures and check the Otsukai app, it's worth it!

Labels: CD, Digimon, Love it so much, Otsukai, Sora, Tai